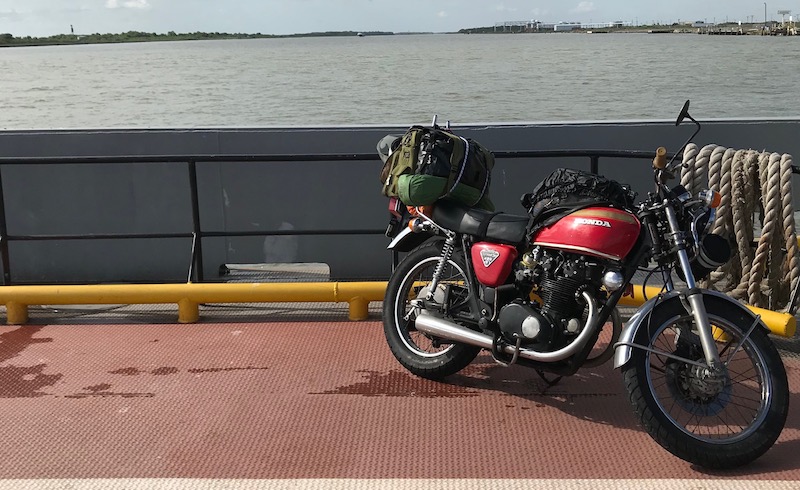 This spring we got a 1974 Honda CB450 as road-worthy as possible. Now summer is here and its time to escape the heat and take this 44 year old machine up north... well northeast to be exact. Every year we make the trek from Houston, TX to the Mid-Ohio Sports Car Course for the AMA Mid-Ohio Vintage Days. This event has been going on for decades and features the largest swap meet for Japanese and European motorcycles, parts, and memorabilia in the country.

As our whole crew converged on mid-Ohio the week prior to the rally, I took 3 days to ride our 450 along the gulf coast, north through Mississippi to the Natchez Trace Parkway up to Nashville, and northeast into Ohio.

Torrential rains among other things held me up in Houston until mid-day July 4th. It seems like every long-distance motorcycle trip I've done has started in the rain. This leads to my first two big lessons learned on this trip:

The ride along the Louisiana coast is beautiful, but is sparse in terms of gas stations. On a small bike like this one the fuel capacity is not the best. The Honda CB450 is similar to the other models we support in that its range is usually just over 100 miles per tank. This also happens to be about as far as I like to go without taking a break to stretch my legs anyway. However, just because this might be the optimal interval to space out fuel stops doesn't mean there will always be a gas station nearby. In fact on this whole trip the gulf coast stretch was the closest I ever came to being stranded out of gas. Fortunately it didn't come to that, but still warrants my 3rd lesson-learned:

3. Bring a fuel can, keep it full, and know where your next stop will be.

My first overnight stop/tune-up was in Bay St. Louis, MS. The bike was running strong and mainly just needed an oil & air check. I tightened and lubricated the chain before setting off towards Tupelo. The middle chunk of that day's ride was beautiful, as the Natchez Trace is one of the nicest roads to cruise on in that part of the country. No trucks, no driveways, no stop lights; just a two lane road through State and National Parks for over 400 miles.

I hopped on the Trace in Tupelo after a short visit with our good friend Dan of Angry Monkey Motorcycles. I had to tear myself away from his awesome custom Triumph Pre-Unit builds if I was going to make it to Nashville at a reasonable hour, which I didn't. A serious rainstorm slowed me down the last 100 miles of the trace, but I made it to my buddy's house before midnight.

The next morning there were a few things on the bike that needed attention. The same oil/air/chain checks as the day before of course. One of the carburetor float bowls had started to leak when I leaned the bike on its side stand. After taking the bowls off to check things out I found that the bowl gaskets had swelled. I cut a small section out and glued them back together which helped. There was also a intermittent issue that would drop the engine speed at idle but seemed to go away once the throttle was open. I attributed it to having messed with the idle screws along the way, but as I would find out later that wasn't the problem.

While working on the bike another thunderstorm blew in and didn't let up for hours. Since time was running thin I set off for Ohio in the rain. That day's ride was mainly along the interstate, as I was trying to make it 450 miles to the rally by sundown. I rolled into our swap meet campsite just after sundown as the cold started creeping in. Perfect timing.

Like I said, we try to visit the Mid-Ohio Vintage Days every year if we can. For us, its the event that has the best balance of chaos & order, show bikes & dirty runners, racing & relaxing, but most importantly a massive swap meet. Just about every niche in the vintage motorcycle market is present and accounted for, especially British and Japanese. If you're looking to buy an old project bike and don't have a ton of cash this is the place to be.

We've tried hauling some of our used parts pile up there to sell, but honestly we would all rather be walking around taking everything in. This year that's what we did. Aside from some t-shirts and stickers at our campsite, we took a break from the sales game to see some cool stuff. For a full recap, check out our Mid Ohio Vintage Days 2018 Recap!

The Long Haul Honda CB450 on the road and in the AMA Motorcycle Hall of Fame Bike Show.