The Long Haul Part 9: Keeping It on the Road

The Long Haul Part 9: Keeping It On The Road

After getting back from the 23 day, 5000 mile road trip, I let our Long Haul CB450 sit for a while. Catching up on tech support questions and getting my pictures, videos, and thoughts together naturally took time. The autumn months rolled around, as did our favorite Texas rally - the annual Harvest Classic 200 miles away in Luckenbach TX. Long Haul CB450 would make short work of a run like that. There was just a little maintenance needed on the bike to make it ready for the next trip.

The figure below shows Honda's recommended service intervals for the CB500T (basically the same bike as the CB450) as per the factory service manual. All of the 500-mile operations were done along the way: inspecting / tightening / lubricating the chain, checking the tire pressure, and a general inspection of the lighting and nuts, bolts, squeaks, rattles, etc. At 1500 miles you are to change the oil and check the electrolyte level in the battery. I kept up with the oil changes, doing one in Ohio and again in Minnesota. The sealed Motobatt AGM battery never showed any sign of weakness, even when I got lazy and laid on that electric start button. 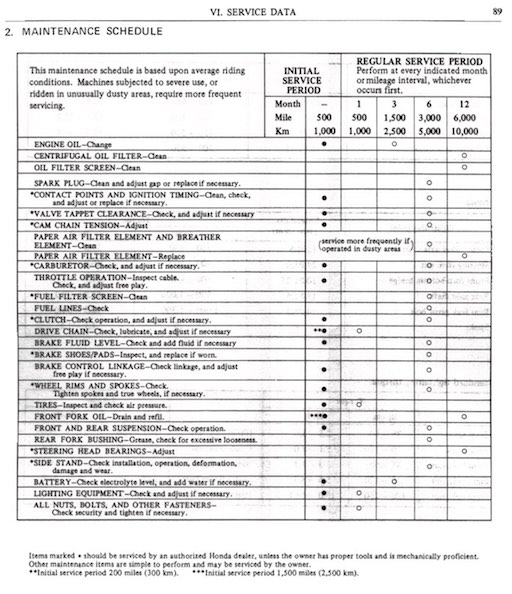 The next column over, the 3000-mile one, is the interval where most of the regular maintenance operations live. Some of this stuff is simple inspection which, if you pay attention to your machine and ride it regularly, you should have a fairly good pulse on. Other more involved procedures are best to do all at once while the tank, carbs, and covers are already off.

Much of the work is a repeat of stuff I did before the trip, so I will not go into it with much detail. In short, the engine got a tune up with the cam chain tensioner, valve clearance, and ignition timing checked and adjusted. None of them were far off spec. I topped off the oil, which still has a few hundred miles before the next change.

I removed the carburetors and inspected them for rust particles and grime in the float bowls, or if the slides were sticking; everything checked out clean. The leaky float bowl gaskets got replaced with ones from a different supplier, and the carbs were re-synchronized before they went back on the bike. The mufflers needed to come off so that some better gaskets could be fitted and the rear mounts could be inspected which were loose.  Most aftermarket mufflers have a thin sheet metal channel where the head of a bolt slides into to holding the bracket to the muffler in place. These channels can crack with a lot of vibration from riding. I have found its a good idea to fit a small washer under the head of the bolt and between the mounting bracket to increase the surface area that is grabbing on the muffler mounting channel. I beefed up the mounts on both mufflers and fitted new gaskets at the header pipe.

While the exhaust was disassembled I was able to access the chain cover / clutch push-rod assembly. I had installed an extra-long clutch cable from the swap meet at Mid-Ohio to accommodate the taller handle bars, its smoothness at the clutch lever was lacking. It was swapped out for a Common Motor clutch cable and it made a world of difference in how the clutch lever feels. While the chain cover was off I replaced the drive chain, which had stretched so much it exceeded the adjustment limits of the chain tensioners. After lubing up the new chain, adjusting the rear brake pedal and adding some air to the tires, the bike is ready to ride once more.

If I were to do it all over again, here is what would have been done differently:

This beautiful motorcycle was originally purchased at the Mid-Ohio Vintage Days swap meet the year prior for $800. The work done to the bike enabling it to make the return trip back to Ohio and beyond took roughly 5 months and nearly $1500 worth of repair parts. With the exception of a set of Kenda Challenger tires and a few parts from the swap meet, all of the parts came straight off the shelf at Common Motor.

You have heard this a million times before, it's what's on the inside that counts. Our Long Haul CB450 does not look much different than it did when we bought it, but now it is in superior mechanical condition. Admittedly the bike was in decent shape to start with, but it needed all the same work that any 40+ year old machine requires. For less than $2500.00, we now have a reliable, (relatively) fuel efficient, super cool daily driver. Beyond that, I have furthered my knowledge and experience needed to make nearly any future repairs myself when the time comes. For me, and probably most of you who have followed along with us, that is far more valuable than the dollar value of the bike itself.

This brings us to the end of our Long Haul Honda CB450 series, in which we did a full mechanical restoration on a 1974 444cc (27cu.in.) twin cylinder Honda CB450 K7 motorcycle and rode it damn near across the country. We sincerely appreciate you following along with us on this adventure, and hope that we can continue to help you on your own journey of mechanical self-reliance. If you wold like to revisit the work we did and/or live vicariously through our 5000 mile summer road trip, here are all of the Long Haul installments that have brought us to this point:

The Long Haul Part 6: Finishing Up our Honda CB450